As I am sure all of the Freud followers will agree upon, a lot of who we are today comes from the influences of our youth. I may not remember what I had for breakfast yesterday or the name of my doctor but there are images from my youth that are forever ingrained in my memory. I know a lot of other tgirls that have stories of sneaking into their mothers drawers and closets. This is where so many fell in love with nylon stockings. One of my earliest memories of my scared youth was a Playboy magazine that was not hid at all. It wasn't the nude models that first attracted me but a cartoon. It took me a while to find it again in my adult life, but 40 years later, I had no trouble identifying it. It was a Richard Sokol pinup but I didn't know that until I saw it years later..... 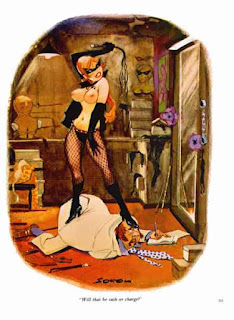 This could help to explain my love of redheads and fishnets and high heel boots. It could also explain my leaning toward strong women. When it comes to celebrities, we all have our favourites too. I still favour the divas of the 60's and 70's. It doesn't mean that I don't like the modern women but I just don't follow so many of them as I did the classics. My list of early influences included Marilyn Monroe, of course. Who's doesn't?
But ahead of MM were a few others that have left their mark in my memory as the ideal women. Jane Fonda, not the aerobics Jane of the 80's but the soft sex kitten of the sixties Jane Fonda as in Barbarella, and Cat Ballou. Then there was Anne Margret, redheaded and bodacious with a soft delicate voice in Kitten with a Whip and Murders Row. Rachael Welch was the bombshell of the day. I loved her in those speghetti westerns. I also loved Natalie Wood. She had a wonderful appeal much like Anne Margret. One of my favourites was Sharon Tate who I best remember in the Wrecking Crew. Sadly was taken away in the Healter Skelter murders. Then of course there was the Batman TV series. Julie Newmar was sex on a stick and Yvonne Creig as Batgirl still drives me wild. My ideal woman is a hybrid cross of all these divas. Other greats from that era were Elkie Sommers, Barbara Eden, Elizabeth Montgomery, and Jane Seymour. My makeup, style and dressing preferences are derived from this era. Later in the late 70's, it was all about Farrah Fawcett, Lynda Carter and Catherine Bach on TV. It was however, those icons of the 60s and early 70s that top my lists.


So who are your influences?
Posted by Mary-Margret Callahan at 03:20 4 comments: 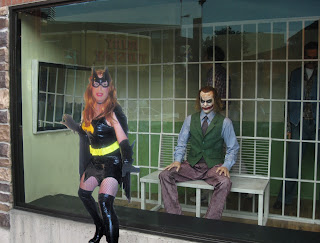 Is firing into a crowd of people insane? Sure. The actions of James Holmes are anything but sane but is he insane? The state of Colorado thinks so. James Holmes painted his hair bright red , called himself "the Joker" and carried out his shooting rampage at the opening night of  "The Dark Knight Rises". So now his court case is sealed and he will likely go into a secure mental care facility. What he deserves is the maximum penalty for murder allowed in Colorado.

Insane? James Holmes had a degree in neural science, a 3.6 grade average and was accepted into a highly rated PHD program. Insane? He chose a school in a state with very lax gun laws. He had a detailed plan for the night of crime. He ordered weapons and ammo weeks before hand. He carefully booby trapped his apartment. He executed his plan to maximize causalities with precision. Then, fully armed and covered in body armour, he gives up to police without a fight. This shows premeditation and intent. He completed a complex estimate and carried out his intended plan to the letter. Insane? Now he is playing the crazy card. Does trying to emulate a fictitious character constitute insanity? If it did, we all would be insane.

In the final public courtroom appearance, a woman sitting in the back row, with a shaved head, stood up and claimed to have evidence of judicial wrongdoing that would aid the defendant. Who is this woman? Is she supposed to be his Harley Quinn? We obviously have yet to see this clown's true endgame. Those of us who have been Batman, and Dark Knight fans for many years know that the Joker always had another level of chaos ready to be unleashed. It was never simple. So if James Holmes really believes that he is the Joker, his plans may still have not all been seen.

I apologize for giving this creep any more attention than he already has but the decision to declare him "Insane" is insane. Lock him up and throw away the key.

Posted by Mary-Margret Callahan at 05:56 No comments:

You remember my post called "The Glimpse"     The Glimpse

I referenced the the lure of the glimpse of thigh above the stocking welt and its sexual attraction. I remembered an old book I read a while back called "White Thighs" by Alexander Trocchi. He was also the author of Cain's Book. White Thighs is a story of a man who is obsessed with this portion of women and worships the thighs of strong women. He can go from master to servant in three seconds from the meer glimpse of stocking thighs. There is a great deal of Dominant-submissive relationships in the story and a fair bit of S&M as well. I find it easy to relate to the obsession that drives the main character. It has had me obsessed for as long as I can remember. 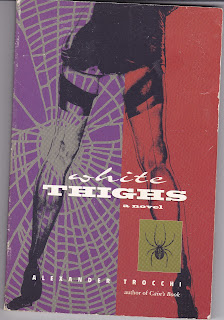 The cover art of the book looked so familiar to me, so I went back to some of my older photos and found this one... 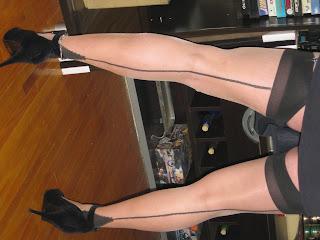 This should put some perspective to it.... 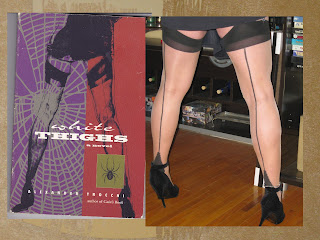 Coincidence????
by the way, its a good read. Beats the hell out of 50 shades.
MMC

Posted by Mary-Margret Callahan at 10:47 No comments: