Alpha Flight is Canada's dedicated superhero team. I have posted about them before, http://marymargretcallahan.blogspot.com/2018/10/alpha-flight.html  . They are a Marvel Comics series closely tied to the X-Men. 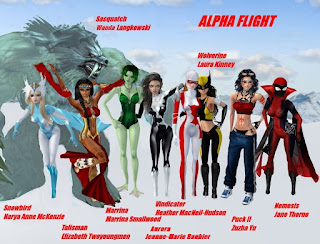 So, for first timers, Alpha Flight is a group of mutant superheroes from Canada, part of Marvel Comic's X-Men line created back in 1979. I posted about them before, so this is an update. As you know, I like to keep my groups all females. Alpha Flight originally had 7 characters, 5 of which were male (Guardian, Sasquatch, Shaman, Northstar and Wolverine) and 2 females, Snowbird and Aurora.
I always imagined a fully female team and that involved feminization of characters until Marvel did me the favour. I preferred that they would all be canon and over time it happened. Here's how: First, the team expanded, bringing up Marrina from Beta Flight along with male character Puck. That brought the team up to 3 females. When Guardian (Mac Hudson) was killed, his wife Heather took his speed skating suit and assumed his role as team leader, calling herself Vindicator making it 4 females. Since Northstar was Aurora's twin brother and they had the same powers and matching outfits, it wasn't necessary to replace him. Next came Talisman, who is Shaman's daughter and yes, has the same powers. She replaces him on the team making it 5 women. That's where I had left it off.
It was a shame that there were still Sasquatch and Puck to replace but it happened. Somewhere around issue 45, Sasquatch (Walter Langkowski) is killed but not really. His soul/identity is saved by Talisman's magic. (Bare with me here.) It's a long story but his soul is eventually reinserted into Snowbird's white Sasquatch (She can shape shift into northern beasts like a snowy owl, arctic wolf, fox, polar bear, narwhal and even a Sasquatch). So Walter is back in solid form again but when he shifts back into human form (like Hulk and Banner) he is a woman because it was Snowbird's Sasquatch. Follow? Anyway, Walter embraces his/her new gender and changes her name to Wanda. It stayed like that until the end of the run about 25 issues later.
That left only Puck. Well, Marvel put out a few more runs of Alpha Flight later on in 1994 and again in 2004 and 2015. In the third run, we meet Zuzha Yu who is Puck's daughter. Sasquatch recruits her onto the new Alpha Flight team as Puck II since she has her father's powers and abilities. Success! In addition, she is joined by the character Nemesis, who can fly and wields a mystical sword. She had been on Gamma team and was promoted to Alpha. That brings us to 8 Alpha ladies.
The last one is a bit of a stretch but can be considered canon. Follow me. Wolverine was an original team member until he left to join the X-Men. X-23, Laura Kinney was a clone of Wolverine. Sure, she wasn't born in Canada like the others. She was born in an Essex Lab, presumably in Mexico. She has her adventures, as a trained assassin, then with the X-Men, mentored by her father Wolverine. She eventually takes the name Wolverine when Logan retires (dies in the movie Logan). She never appears in the Alpha Flight comics BUT, in the movie, "Logan", she escapes persecution in the US from the government and Essex by fleeing into Canada with a handful of other mutant kids. So, the stretch is the assumption that while living in her father's birth country she gets recruited into Alpha Flight. It's possible. That's how I get my canon all female, Alpha Flight 9.
My apologies to fans of Diamond Lil, who I considered a villain and an enemy of the team even though she was on it for a bit, and to fans of Persuasion, aka Kara Killgrave, aka Purple Girl, who was a lifer on Beta Flight even though she was in a lot of issues.
So a little fun here.
All is quiet in Canada and Heather  decides to get all the girls for a team building weekend at the cabin. Jean-Baptiste has ideas of her own...
Pajama Party time. Aurora's idea. 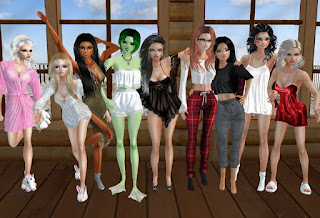 After a few a drinks, the bonding begins... 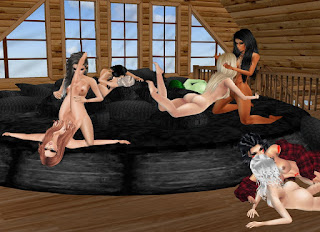 Hopefully they will show better teamwork from here on in. LOL

Posted by Mary-Margret Callahan at 02:21