A third addition to the ongoing Alt Canada history which started with the award winning essay by dathi_thorfinnsson about a different Canada that won the War of 1812 outright against the US and changed both country's futures. To view his entire alternative timeline, see it here, alternatehistory .

So my first post on the subject, https://marymargretcallahan.blogspot.com/2020/01/alt-history-canada.html
is a continuation on that. In it, I followed along a natural progression of events to the present. I also added an alt list of Prime Ministers, and a look at Canada's sports in this alt timeline.

In the second post on this topic, https://marymargretcallahan.blogspot.com/2020/03/alt-history-canada-part-2.html
I gave a detailed view of all the provinces and territories in the alt timeline in a sort of wikipedia style including maps, flags, economy, schools, etc. I had also added the military bases in each province and territory. Being the retired military person that I am, I decided to explore this further.

In the first essay, I posted that Canada would be much more involved in the world wars and be a force in the world during the cold war and still be today. As a former member of Canada's armed forces, I have seen how in real life our military went from a highly respected force following WW2 and Korea to a much smaller, less forceful version after the Avro Arrow debacle ( https://en.wikipedia.org/wiki/Avro_Canada_CF-105_Arrow ) and during the Pierre Trudeau years.  In this alt timeline, Canada has a much larger population (95 million today) and a more robust economy, making Canada the number four economy in the world. With Canada playing a bigger role on the world stage, in the UN, etc, we keep our military large, sharp and well equipped. The Canadian military has always been seen world wide as highly trained, disciplined and respected force but just too small and under equipped to matter.

In this alt timeline, Canada is less reliant on importing weapons and materials. Since Beoing is a Canadian company, we build most of our own large aircraft. Avro is still the world leader in fighter aircraft production. The Mark 4 Arrow is now the top fighter aircraft in the world and their classified CF-220 is untouchable. Bombardier, Bell and DeHavilland also contribute to this effort. Only a small number of aircraft are imported and usually for trade offs from our own companies. Canada maintains 95 squadrons across the country in 24 wings. Since Canada has the world's largest oil reserves, we are totally self reliant on fuel for our vehicles, ships and aircraft.

Our Army is also almost self reliant in equipment. Our tanks are manufactured in Detroit, enough for three full size armoured divisions and five mechanized infantry divisions. Our artillery pieces are made in Hamilton. Ammunition is also home made. Our Arctic Division is fully equipped with snow mobiles and other snow machines from Bombardier . There are also five specialized divisions (mountain, airborne, air mobile and arctic). The Special Forces are division sized and have a black budget. We have over 270,000 soldiers in the Army. Canada's reputation also includes having never lost a war (including three against the US).

Canada's Navy was still small to start in this timeline. That having to do with Britain's policy on having the Royal Navy rule the seas. They deemed that their Navy would protect all the realms of the Empire up to the first world war. That is where Britain saw the weakness of the policy and decided to have the Dominions build their own fleets usually with start up ships from their own fleets. In this timeline, Canada starts ship building in earnest between the wars. We still import vessels from Britain and New England. Post Korean war Canada sees Canada build nuclear powered subs and aircraft carriers. Canada is a world leader in nuclear energy. Our uranium resources and leading tech make it possible. Canada and Britain trade off, with ship tech coming from Britain and nuclear tech from Canada. Canada is able to defend the north without help from Kiska, Alaska in the west to the east coast of Greenland and from the Beaufort sea in the north to the Great Lakes in the south as well as the border rivers, the Maumee, Mississippi and the Columbia.

Canada is also a nuclear power. We have always had the technology and as a world power, we embrace it. That means that our North American alliance (Canada, US and New England), NORAD is dominated by Canada, running the show from North Bay. We are also a bigger player in NATO. As well as these alliances, Canada and Britain still maintain a close Imperial alliance. Britain keeps one fighter squadron, one armoured brigade group, a cruiser and a destroyer attached to Canada's forces in exchange for continued loyalty. 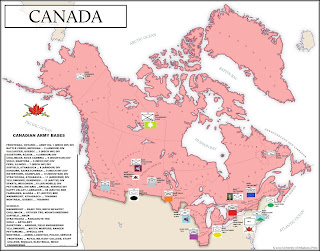 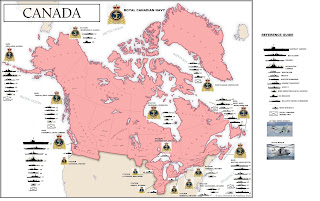 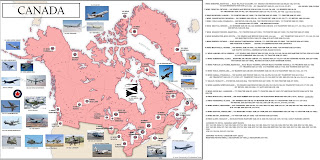 Posted by Mary-Margret Callahan at 14:00